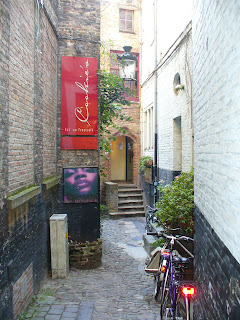 We dumped off our haul from De Bierloods at the trekkershut and hiked our way back into the city center of Brugge. We spent more time than planned for at Adegem and we were going to have to cut the bar hopping short to pack up the Polo for an early morning departure.
Dave was doing some souvenir shopping so I stole off toward the main square to grab some frites. On my way back, I noticed a sign at the entrance of a narrow alley. Upon closer inspection, it read "De Garre". Excellent! De Garre was a cafe that was on my list but had i been walking at normal speed, I would have missed it completely.

After Dave finished up his purchases, we headed down the alley to get some ale. De Garre, like many of the bars in Brugge is small but does have a second floor. They offered a house tripel and had a sign informing that no customer could order more than three during a session! 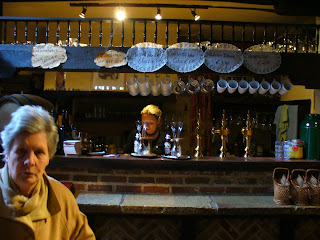 But the strength was not the only selling point for this tripel. It was spicy enough to offset the considerable maltiness and sweetness. It was lively and just a bit warming. Very nice tripel.

The bar was rustic and woody, very "brown bar" with a lovely hewn wood bar and dozens of old bottles on display. A roaring fire was crackling away in the hearth and the place was very cozy indeed. We ordered a couple rounds of the tripel and headed back out.

Sadly, time was running short and we were going to have to cut the beer drinking off early. We had a lot of packing to do and we had to take the Polo back to Antwerp first thing in the morning (90 minutes away) and had to get up early. So we headed back toward the campground. 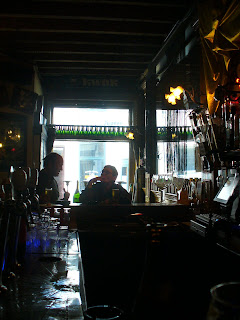 But on the way, we ducked into a cafe called Kelk. It was a dark, smoky cafe that offered little in the way of seating outside of the enormous ornate bar. We grabbed a couple stools and the beer menu. The list was very good and we went with De Dolle this time. Dave tried his very first De Teve and I stuck with the high-octane theme and ordered the imperial stout.
Peter, the owner, recognized us as tourists and started chatting with us. He was quite proud of his bar and his future plans for it and took us a tour of the facilities. Lots of construction was going on upstairs as well as in the basement and in the rooms behind the current bar. The plan? A expansion of the cafe and a beer shop upstairs that would boast more than 1000 varieties of beer. Very impressive vision. i wish we could have hung around for a few months to watch him do it. We went back to the bar, finished our beers, met the old dalmatian who lives at the cafe and, thanking Peter for his hospitality, started making our way back towards the campground.
Packing turned out to be more challenging than we realized. We had a lot of beer, glassware and other souvenirs to get home. To lighten our load, we drank the surplus beer! Among the casualties:
Floreffe Tripel
Lindemans Faro
St. Louis Gueuze Fond Tradition 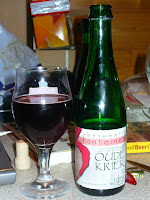 After the bags were packed to our satisfaction, we loaded up the car and turned in. We were going to be rising early to get the car back to Antwerp and hop the train for Brussels in time to drink our fill for the last day of the trip...and see Brasserie Cantillon.
Posted by Unknown at 8:00 AM

Places for a Pint in Georgia